I announced jTab back in July, and there have been some nice improvements over the past month which I just tagged as a "1.1" release.

jTab is a javascript-based library that allows you to easily render arbitrary guitar chord and tabulature (tab) notation on the web. Automatically. It is open source (available on github).

I've also established a mailing list for jTab. All are welcome to join in to discuss internal development issues, usage, and ideas for enhancement.

Some of the key new features:

Heroku is an awesome no-fuss hosting service for rails applications (I think I've raved about it enough).

It works great for solo development. But what if you want a large team work on the app, while limiting production deployment privileges? Or if you want the application to run as an open source project?

Since git is core infrastructure for heroku, it actually makes setting up distributed source control trivial, like in the diagram: 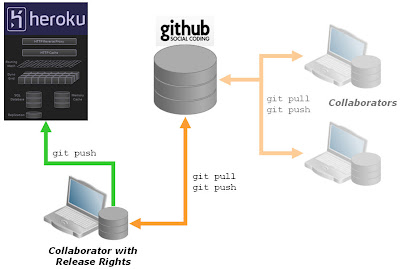 Here's a simple pattern for setting up this way. It may fall into the special category of "the bleeding obvious" if you are an experienced git user. But many of us aren't;-)

First, I'm assuming you have a rails application in a local git repository to start with. Like this:

Next, you want to create a new, empty repository on github. Github will give you a clone URL for the new repo, like
"git@github.com:mygitname/test.git".

Now we can add the github repo as a new remote location, allowing us to push/pull from github. I'm going to name the destination "github":

At this point, you are setup to work locally and also collaborate with other's via github. If you have a paid account on github, you can make this a private/secure collaboration, otherwise it will be open to all.

Next, we want to add the application to heroku. I'm assuming you are already registered on heroku and have the heroku gem setup. Creating the heroku app is a one-liner:

You can see that this has added a new remote called "heroku", to which I can now push my app:

PS: Once you are comfortable with this, you might want to get a bit more sophisticated with branching between environments. Thomas Balthazar's "Deploying multiple environments on Heroku (while still hosting code on Github)" is a good post to help.
read more and comment..

I Tweet My Way is a twitter application to help you to set goals and get things done with the support of your friends and followers.

It's an application I've had in stealth for a while, but decided it is about time to let it out in the wild.

Do you have a goal you really want to work on? Quitting smoking, losing weight, paying off the credit card, or learning a new skill - these (and anything else you can imagine) are all suitable objectives to set yourself with I Tweet My Way.

I've had a long-standing interest in goal setting and tracking, but I must admit it was the advent of the "twitter-application" fad that got me thinking about how you could do a "getting things done" style personal trainer with Twitter. Now I'm looking forward to see how it gets used for real. I'm very interested in any feedback you may have. Did it help? Does it work? Why didn't it help or fit your needs?

Technically, it was built with rails and uses the Twitter OAuth support for authentication (you can read more about that here). I have it hosted at heroku (my favourite rails hosting service, although I am a bit leary about performance in the Asian region at the moment).

Must be at least two years ago that Singapore Airlines changed the layout of their KrisWorld inflight entertainment magazine and it has bugged me ever since. The update coincided with a revamp of the entertainment on offer (a staggering 80 movies and hundreds of CDs). Unfortunately, the magazine suffered.

I've been waiting for SIA to "fix" KrisWorld, but last I flew it was still the same. Maybe one day. Do let me know if you see a new layout on any of their flights!

But it had me thinking, and I thought worth discussing because it seems a good example of how marketing-driven design changes can have unintended usability consequences despite everyone's best intentions.

Don't get me wrong, SIA remains my favourite airline of all, but it is disheartening to see that even the best airline in the world is susceptible to getting stuck with "bad design". Makes you wonder if there is any hope for the rest of us.

My gripe is with the layout of the CD selections.

How do you select an album you might want to listen to?

When looking through a long list of albums, chances are that all of these methods of recognition and selection are at play.

The trouble with KrisWorld is that they have separated the album cover display from the listing of artist and album name. The only thing that links them is the artificial numeric code that is applied to each. 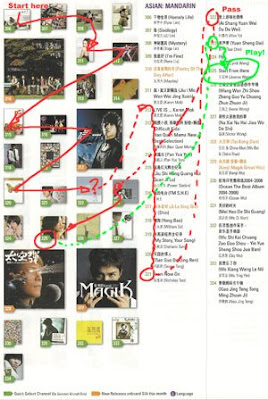 On the left is an approximation of my actual scan pattern when trying to make a selection.

First I scan the album covers. Many I don't recognise and skip over.

I find something I think I recognise. To be sure, I then cross-reference into the album list and start another search using the special code number.

At this point I'm wondering if eye exercises are a safety feature designed to prevent DVT, or just intended to make the flight pass more quickly. 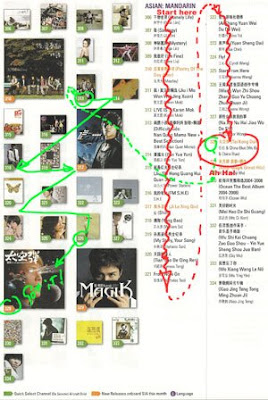 Maybe Joanne Wang is a little too sedate for how I'm feeling now, so I start another search through the album/artist list.

Down we go. Some I recognise (but without the album cover I'm not 100% sure).

Ahah, Wu Bai. That's more like it. But which album is this? Cripes, time to find the matching album cover to make sure.

Finally. Time to listen. A good thing this is CD and not a movie, because my eyes need a rest now..


Why do I need to work so hard? How to solve this usability nightmare?

Well, one suggestion is to just keep it simple. Cover art, album title, and artist are bits of information that both separately and in combination help me search the listings the most effective way. So just put it all together in the list. For example: 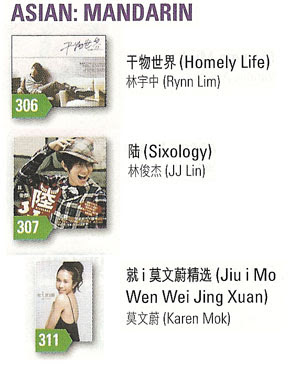 The eliminates all cross-referenced look-ups, is simple and direct, and does not require significantly more space. Best of all, as a "user" it is effortless.

Funny ... isn't this exactly how the layout used to be designed?

The lesson? Sometimes, designs must be seen to change for marketing or other business reasons, letting you loose in a requirements vacuum. The danger is that in the absence of specific functional or usability needs, other factors such as aesthetics and branding will expand to fill the void. Done carelessly, you can inflict untold collateral damage on the product through the process.

The solution? Consciously re-introduce at least a usability/functional benchmark into the design process - "be no worse than it was before". Better yet, ensure usability improvements remain a key objective - no matter how good you might think it was before, perfection is always one better.

And yes, usability applies as much to the printed page as it does to the web!
read more and comment..