A triac is a "bidirectional thyristor" because it conducts in both directions and is typically used in AC applications.

The basic behaviour of a triac can be summarised in two rules:

This project is a test of the classic AC dimmer circuit with Triacs with a 12V AC supply. It allows power to be dialed down by effectively chopping out part of each cycle. As always, all notes, schematics and code are in the Little Electronics & Arduino Projects repo on GitHub.

I keep finding new uses for GitHub Pages - situations where in the past I would otherwise have spun up a web site on heroku or similar. But if the site can be static, and especially if you are already hosting the git repository at GitHub, Pages are perfect.

For a long time, I've maintained the LittleArduinoProjects project index as a simple table in the README. But it wasn't particularly nice or usable, so I decided to pimp it up and serve the catalog index with pages. Turned out to be a piece of cake (with a few scripts to convert the old index to JSON for the catalog page.

So here it is, Little Electronics & Arduino Projects at leap.tardate.com: 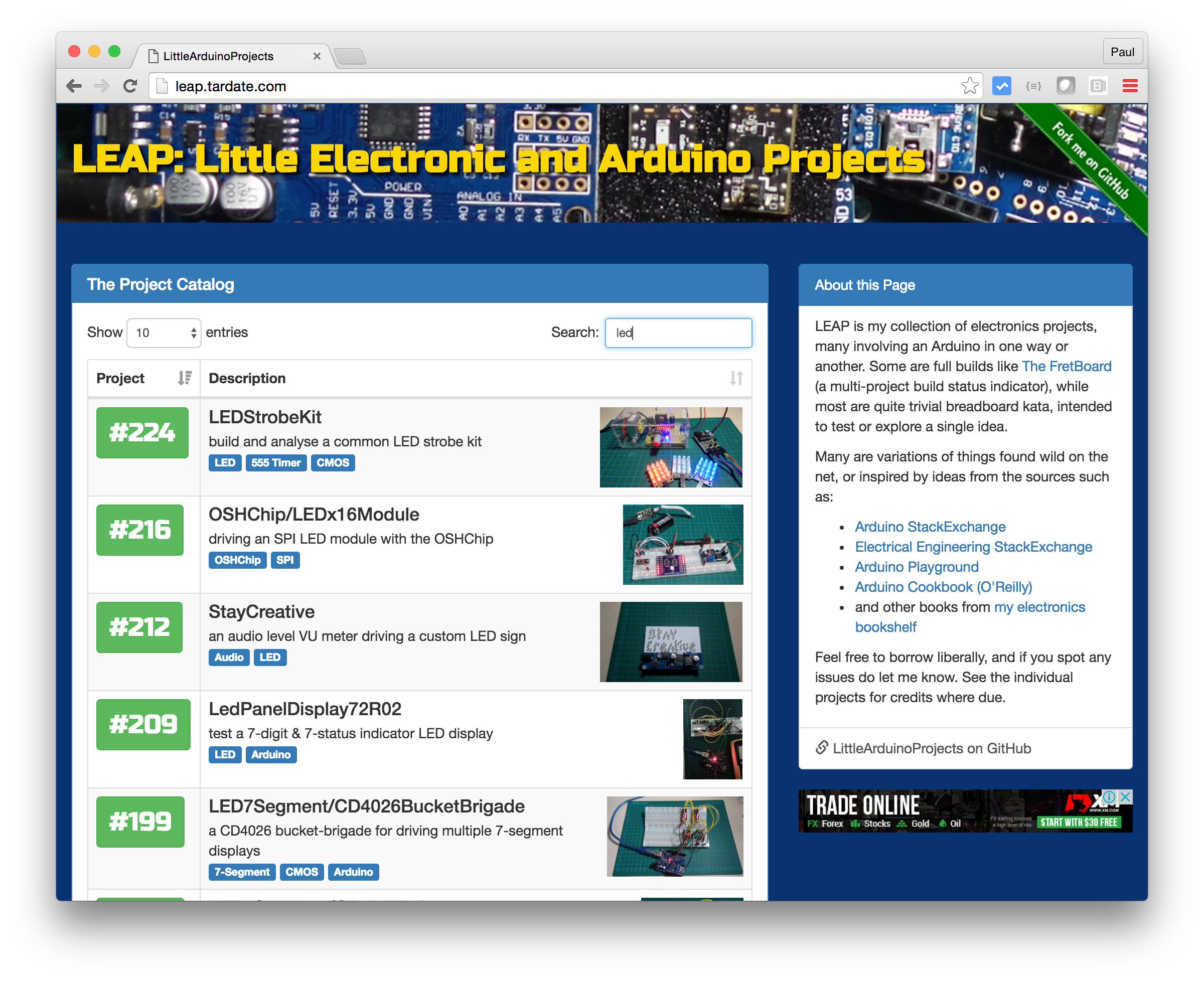 As always - and since the gh-pages code lives in the same repo - all notes and code for the catalog are available in the same Little Electronics & Arduino Projects repo on GitHub.

I closed a bug yesterday that's been kicking around for almost a year as a sometimes fails on CI but no-one can figure out why frustration.

Sooner or later you'll hear someone suspect it must be a problem with CI. Which is ironically funny in a shoot-the-messenger kind of way!

Thankfully our "CI issue" turned into a for-real bug. In short, the code involved many classes with near 100% test coverage. It had been read and re-read and everyone would swear there's no way this could fail.

No, of course we were wrong. The bug was basically a conspiracy of two bits of code in two very different places:

And you can see where this leads: our problem was filtered data ending up by obscure and circuitous means in field1 and field2 ... with a 1 in 7 chance of the record validation failing (never happens on our machines of course). After that it was an easy fix.

So once again we learn the lesson:

I've seen this scenario play out a dozen times in as many years, and CI was always right;-) Since it keeps cropping up, it made me think about how to best knock these on the head. Five things:

start by assuming there is a bug until proven otherwise

It's too easy to give up, find scape-goats or "magic" explanations otherwise.
Take heart in the fact that if you assume CI is right, the odds are on your side.

put a canary in a coalmine

When we first encountered this issue and failed to find the root cause, we added code to catch the "this is about to fail in that unexpected way" situation and log/report appropriately.

So while the ticket got iced, it's been that "canary" that keeps dying in order to keep the issue alive! So when it died again yesterday, it was a painful reminder to get to the bottom of the issue once and for all.

Always found in the last place to look. So when you've honed in on the code you think is failing, studied it upside down, left to right, and still can't find the issue .. maybe it's time to consider you might be right. Throw out that hypothesis, pull back and fan out instead.

If errors happen infrequently, reproducing them is like trying to win the lottery. The more entries, the better your chances.

So don't run tests a few times, run them millions of times if you have to. Computers are good at this. That's how I diagnosed this latest issue while tweaking logging and the test itself. Bash away:

This sounds so simple that it's easy to overlook.

If things fail randomly .. it only takes a few moments to search the code to see if anything is using something similar to a random function.

Could it be possible that random failures and the use of rand() might be related?!
May be not, but if they are, that's a cheap win!

I'm working on an idea where I need to measure temperatures to around 500°C - above those typically supported with semiconductor sensors or thermistors.

This project demonstrates the basic approach using an Arduino as the "temperature logger". I'm using a K Type thermocouple that's rated up to 700°C. Since thermocouples only measure a differential temperature, I'm also using an LM35 to provide the cold-junction baseline. The temperature measurement is displayed on a 5110 LCD. 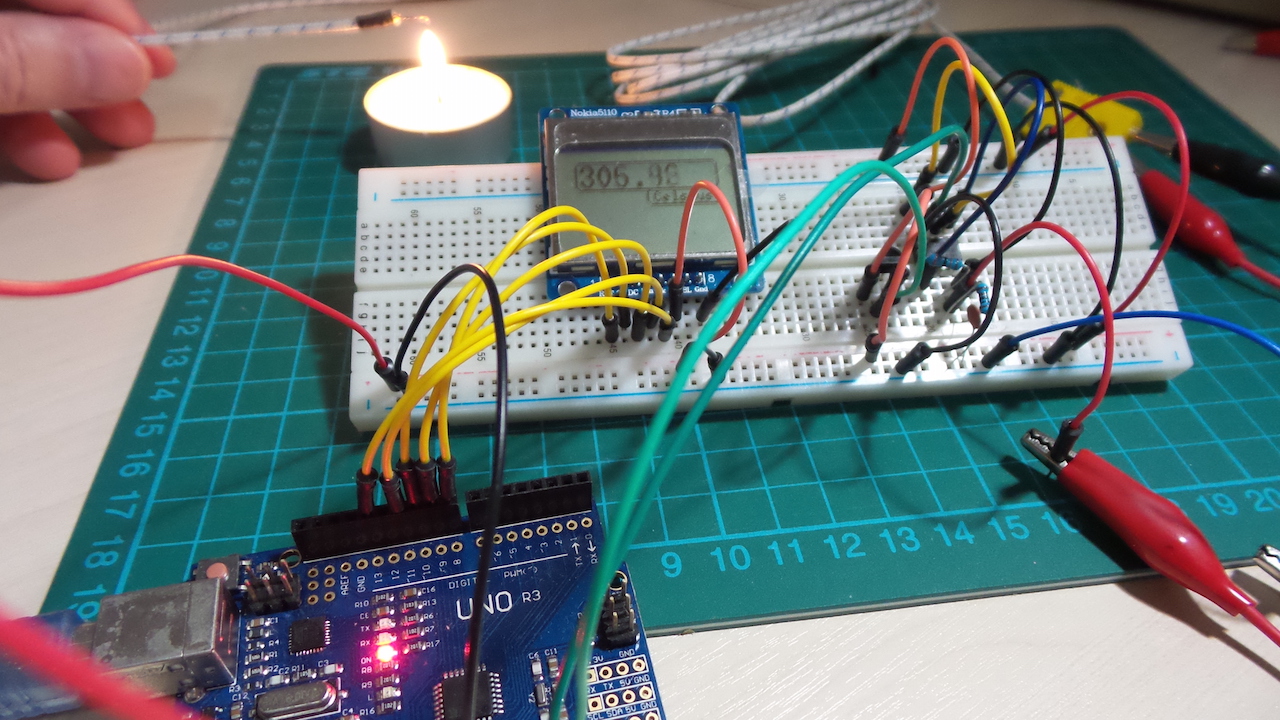