Ended up catching the SOA track which was moderated and introduced by Ng Beng Lim from NCS. Oracle, Microsoft and BEA all had a failrly standard pitch with a heavy emphasis on governance (although slightly different ways of modelling the overall journey). 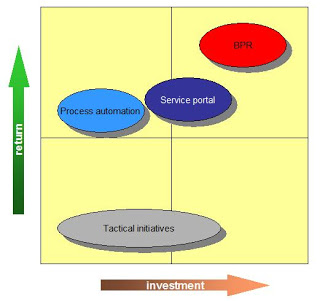 Jurgen Coppens (Accenture) did a refreshingly different approach with a focus on overall transformation (to be expected;) but in particular value realization. Presented some good models, like my sketch to the right, and also advocated a pragmatic approach of focusing on the quick wins in the early stage.

One impression I got from all the speakers however is that they all called for a rational architecture and governance process that is strongly tied to business strategy. In fact this is a fundamental assumption. I have this impression however that for many companies are not really ready to address the question of whether to adopt SOA or not, since they are still have not established the foundation architecture and governance competency. Baby steps.

Anyway that's a wrap for the conference. As I mentioned in my first post, this was the first that had caught my eye for some time, and it lived up to the promise.
ix2007
read more and comment..

iX2007 day 2 am - some nice provocative points of view

Morning sessions for day 2 of iX2007 have wrapped. Some highlights...

Douglas Merrill, Google, delivered a provocative point of view on the implications on Enterprise IT. Talked of the changing expectations of users and what they will demand and use in the enterprise. Yes its Web 2.0, but also more broadly the impact of an increasingly IT-literate workforce.
For IT, it means embracing new ways of conceiving enterprise solutions. And if SMEs are running their own infrastructure and applications, they are probably wasting their money; they will be exploiting Software as a Service.

Bit disappointed in David Willis' (Gartner) presentation. Did a good job of summarising the trends but nothing earth-shattering.

Louis Broome gave us great insight into the benefits Microsoft are getting run production (podcasts, video) inhouse. Cost-savings are one aspect (75% or so). Amazing to hear that their latest studio only cost US$13k to setup, and their 4.5 headcount are producing close to 1000 hours of video a year (thats with post production, compositing and the like).

Jeremiah Owyang argued that the corporate website is rapidly becoming irrelevant, being sidelined with the rise of 'disruptive' social network tools (from a marketeer's perspective). Go to the corporate website for product specs etc, but if you want buying advice and opinion, you are more likely to trust your peer networks. Corporate employees are in a way contributing to this with the rise of blogging etc, where they blur the corporate boundary with informal communication (bidirectional).

A good morning. Now looking forward to the tracks; looks like I'll hop between SOA and Security, although I'd also like to catch eGovernment!
ix2007
read more and comment..

iX2007 started today here in Singapore. The first conference that really caught my eye for quite some time. Today was keynote day.

Interesting to see Mr Chan Yeng Kit (iDA) presenting his update on Singapore's iN2015. When you look at the progress being made in key areas like digital infrastructure upgrade and undergraduate admissions in ICT programmes, I think it reflects accurately the "mood" in the industry, which I'd summarise as "optimistic, with increasing confidence". SARS, dot.bomb and the Asian financial crisis are still recent memories but slowly receeding into history ...

The Business Forum ran as a panel discussion involving Pek Chew Yai (SiTF), Lim Chin Hu (Frontline), Craig Gledhill (Cisco) and Phey Teck Moh (Pacific Internet). Robert Chew (Accenture) did a great job as moderator by feeding the discussion with comments coming from the chatroom. I've got to say that this resulted in the most interactive and interesting panel discussion I've ever experienced in this part of the world. Amazing to see the realtime flow from keyboard to chatroom then having a direct impact on the discussion. I think The Digital Movement cashed in on a really good bet by setting up the chat (running 37 Signals Campfire) and providing SMS and free wireless access. We may be too paisei here to step up to a microphone, but in the chatroom the speech runs free and wild!

Great to see the conference assuming a web persona; Jeremiah Owyang has already blogged on his Day 1 thoughts.

All this enthusiasm to use the technologies at hand to enhance the conference experience really underscored for me one of the topics that got a bit of an airing during the panel: are we clear on our aspirations as both consumers and producers? I think so much of the focus in iN2015 is geared towards the consumption ... improving our already-great infrastructure, ensuring we have an ICT-savy workforce. I think we are still struggling with the production aspect, the irony being that there appears to be a huge amount of energy and creativity pent up in Singapore just waiting to be unleashed on the production side. How many of the grads from SMU, NUS, NTU and the like are destined to face the choice of (a) stay in Singapore but end up in a less exciting role than they had hoped for, or (b) head overseas to pursue their dreams? I guess they can take comfort that going overseas is at least a realistic option once again!

Meaning no disrespect to any of the pioneers doing amazing work in Singapore, ICT and Digital Media production is still niche here. And I don't see too many signs this is changing. There seems to be a defacto assumption that its good enough to be a "hub". After all, that is what has made Singapore so successful in logistics, corporate and financial services. But I wonder if that necessarily has to be the case for ICT? Its almost like we are afraid to dream the big dream.

I'll throw a hypothetical out there:


Solutions? Well of course, in true Singaporean style, we could say the gahmen needs to do more to set a bold vision, attract and support ventures of this nature. That means EDB, SiTF and iDA. But I think the real change needs to come from within the ICT community in Singapore (inlcuding those working in the multinationals). Be big, be bold, be best. Believe.

Anyway, looking forward to the track sessions tomorrow. My only problem is that I want to be in 3-4 places at the one time. Hard to decide between the 6 tracks: digital media, eGovernment, security, SOA, wireless and eLearning. I think I want to participate in them all ... now is there a technology solution for that?

Antony Reynolds' recent Diving for Perls with WSIF post gave a great example of how you can use HTTP bindings to call perl CGI scripts from Oracle BPEL Process Manager.

If your perl code is not already available to be called in this way, then what to do? Certainly the "ideal" would be make it available as a native Web Service and do away with any special binding. Thanks to the SOAP::Lite module, this is actually quite easy to do.

I'm going to walk through an example of how to take some aribitrary perl code, wrap it as a Web Service, and then call it from a BPEL process. See the diagram: In this example, there's really only one bit of code that "matters" ... a helloWorld function. I'm going to start with this wrapped in a perl class module called HelloWorld.pm. As you'll see shortly, wrapping the business functionality in a class is a good idea because it allows automatic dispatching from the Web Services interface.

Important to note that while the code here contains some of the module niceties, it doesn't make any reference to SOAP, CGI or BPEL. It's plain perl. We can prove that with a little perl test program:

The dynamic typing of perl and flexibility of the SOAP::Lite module really live up to the make simple things easy motto. In three lines of code we have a SOAP CGI server for our HelloWorld class (that's why I made it a class;)

That was so easy, there must be a catch right? Well yes, one comes to mind: the reply message elements will necessarily have some generated names (like "s-gensym3") since there is nothing in our code to provide any guidance for things like the "name" of function return value elements.

After dropping HelloWorld.cgi and HelloWorld.pm into my apache cgi-bin, I'm ready to test the SOAP service over HTTP. We can whip up a client in no time:

$ perl HelloWorldWSClient.pl
The response from the server was:
Hello Sunshine
$

If we sniff the network or route this request via a tool like org.apache.axis.utils.tcpmon, we can see the outbound request and incoming reply:

Alas, perl's flexibility means that automatically generating a WSDL for our SOAP service is easier said than done. Unlike in strongly-typed languages, perl methods can take an arbitrary number of parameters of arbitrary type ... whereas of course a Web Service should have a very clearly defined interface.

I think one of the best approaches at present for generating WSDL in perl is the Pod::WSDL module. I'll perhaps leave that for another blog entry. For now lets just assume we'll manually create a WSDL for our service:

Invocation from a BPEL Process

Now you have all the bits in place to invoke your Perl code as a fully-fledged Web Service from within BPEL. I won't go into this in detail here because it is the standard Web Service invocation process. Just add an "invoke" activity in your process and point it to a partner link defined based on the WSDL generated above.

Once you have deployed your process, you can test it from the BPEL Console. Here's an example of the invoke activity in one of my tests: Hopefully I've shown that exposing perl code as a Web Service is actually pretty simple. Once done, the code is then available for use by standards-based tools like Oracle BPEL Process Manager.

There are a couple of consideration to bear in mind though: