Doing one thing at a time

James Shore discussed Agile Release Planning on this recent PM podcast, and it was refreshing to hear the benefits of agile pitched to a product management audience.

Like the best ideas, the tenets of agile appear almost too simple to be true. "Master of the bleeding obvious" Basil Fawlty would say. Yet most organisations seem structurally incapable of behaving along these lines.

James' presentation is very entertaining, and well worth a listen. He keeps the agenda short and well tuned to a PM audience. Although the ideas are born from a software environment, they are largely transferable to other domains. A discussion of five concepts to help you increase the value you deliver in business:

The one project at a time struck a chord with me, as I've recently been campaigning in a minor way along these lines. The classic "proof" is the positive impact it can have on ROI if you allow appropriately sized teams to focus on one thing at a time. This is of course in addition to any productivity benefits you get from avoiding task switching, and giving people the chance to get into a flow state.

Here's my version of the graphic to illustrate the point: I've fallen in love with bookjetty, a great new site for books by Herryanto Siatono.

Although this blog is officially dedicated to prata (and always will be!), you can tell I use it to keep a diary of the books I'm reading. I probably always will, but I do try out all the "book tracking" sites, facebook apps and so on that I come across.

None have really jiggled my worm until I discovered bookjetty.

The killer feature for me is the great library integration on the site. It helps answer all the usual questions I have whenever I hear about a new book..

The library catalogue checks work a treat - right within your booklist. I used this feature yesterday as I knew I would be heading to the library. Within 5 minutes on bookjetty I had added a few books I'd been interested in reading and found out that 3 of them were available and on the shelf at my local library. An hour later, I had them checked out.

The bookjetty developer(s?) have done a great job of integrating the libraries, especially considering that most are still running archaic web 0.1 systems which are not very mashup friendly. I've posted before about a kludge to do library lookups from an amazon page, but it never works very reliably because of the dumb library catalogue it needs to talk to, so I can appreciate some of the challenges they may have had.

And here's an example of how the library checks appear... 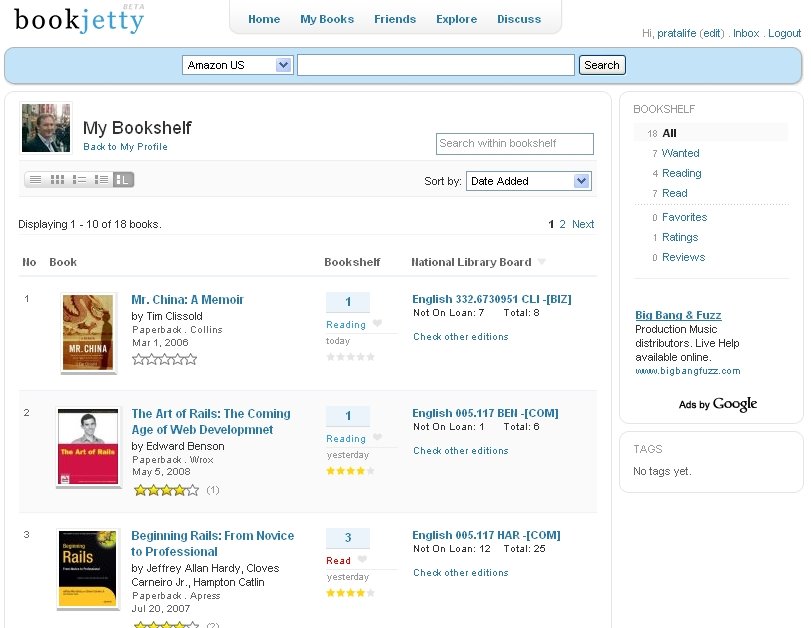 If you are into books, I heartily recommend you go and register at bookjetty and check it out!
read more and comment..

Moving to Disqus for Comments

I recently moved this site's commenting feature to disqus.com after listening to the great interview with Daniel from Disqus on net@night#53. I see I'm not alone..

You may think A Blog Without Comments Is Not a Blog, and most people have reviewed Disqus in terms of the improved commenting features it provides.

There is another point of view that really hit home for me as I considered the move.

I remember the pre/early web days when I was a very heavy nntp (news) user. In the job I had at the time, it became my lifeline to various specialist groups where I would share the little I knew and was able to draw on the sometimes instantaneous feedback from a global community of peers. I think those days still rank as the best and most productive community networking experience I have ever had.

As the early web came to life there were many areas in which we took short-term hits for (hopefully) long term gain. We moved from (pre-Domino) Lotus Notes to web publishing for example, not because it was better but because it represented a broadly accessible, stanadards-based platform. Web 2.0 is I think only now starting to surpass the degree of interactivity you could achieve with Notes circa 98.

IMHO, collaboration is another area that's been through a similar process. Simplifying somewhat, I saw blogs and web-based forums as a bifurcation of the old collaboration experience I had with nntp. Blogs at least did a decent job of allowing anyone to publish what they thought was worth sharing. Web-based forums never really tickled my mustard however.

Implementations have never been quite as efficient for greasing collaboration as nntp, and they lack the universal federation model that nntp has always had baked in. It also meant that forum discussions and information publishing (via blogs etc) became divorced.

So when I look at Disqus (and other similar offerings), I see a scheme to finally re-unify the publishing and discussion worlds. Disqus provides the forum capability integrastes with tyhe blog publishing world, eliminating the question "should I blog it, post it to a forum, or both?"

As you can tell from my little diagram above, I don't see much role for web forums as we know them today in the new world of collaboration. Maybe I am overly negative, but it does make me smile/cringe whenever I hear someone talking about "web 2.0: you know, forums etc..."

I'm using blogger. Since there are various guides around for the manual integration of Disqus, I thought it would be worthwhile to report on how the process went for me.

I'm using customised blogger layouts for my blogs, and actually found that the automatic integration support built into the setup process on Disqus worked very well.

Just a few things to note:

Postscript: as I noted here, I've unfortunately had to drop my disqus experiment because it just isn't proving easy enough for people to use. Shame .. for now!
read more and comment..

The other day I added my voice to the call to end the perfidious practice of social networking sites requesting your email password.

In the discussion I made an off-hand reference to a fictitious site called iHazYrCreds. Well, it's not fictitious any longer ;-) For better or worse, you can now visit iHazYrCreds.tardate.com to find out more about the common password traps to avoid.

I'd like to see the day when asking for an email password in order to "import contacts" is deemed totally unacceptable (and negligent professional practice).

I would also welcome any moves by the big email providers (google, yahoo etc) to explicitly outlaw such use in their terms of service. I'm no lawyer, but I believe it is debatable whether it is already a violation.