So this weekend I've dressed up jTab as a little web application to help you learn chord fingerings for guitar... 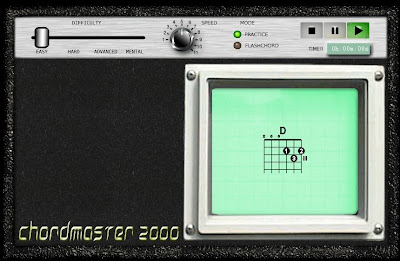 OK, so maybe I sexed up the design and UI a little too much for such a simple task, but it was fun to see how far I could go with javascript and SVG (and no flash or silverlight).

It was also a proof point for jTab - the javascript library I released last week that renders arbitrary guitar chord and tab using SVG. Happily, it worked fine without a tweak - just some extension methods that are specific to the ChordMaster application (like getting an array of all chords that are defined as "intermediate" level).

PS: big thanks to @jasonong who's jumped in and already made some great contributions to the jTab project on github -- It's amazing to see github rock as a "social coding" platform - create a public project one day, have changes to merge back the next. Trivial to do with git, and the great visualisation of the project revision/branch history makes merging so easy to understand.
read more and comment..

jTab - Guitar Chord and Tab Notation for the Web

Guitar tab (notation) is all over the internet, but it is usually in either a fixed/non-interactive form, or painstaking ASCII format.

I've always wanted a better way, and two things I've looked at recently inspired me to think it might be possible: Dmitry Baranovskiy's fantastic work on the Raphaël SVG library, and Alex Gorbatchev's syntaxhighlighter.

So now I can introduce the result of my latest weekend project:

jTab - newly minted and ready to rock and roll!

See the project home page at http://jtab.tardate.com for more examples and information about how you can use it too. jTab is open source, with the master source code repository on github .

What does it do?

jTab is a javascript-based library that allows you to easily render arbitrary guitar chord and tabulature (tab) notation on the web. It handles implicit and automatic rendering of any page elements given the special class name 'jtab'. It can also be scripted for more sophisticated or interactive effects.

Grab it, use it, help me improve it, or just let me what you think...
read more and comment..

I've been using rails with the Twitter REST API of late, using the oauth gem as the base. It works well, but keeping up with the API changes can be a challenge!

In the recent update to OAuth 1.0a, there were two critical changes required:

Web-apps should specify the oauth_callback

Through trial-and-error, I found that if you don't explicitly specify the oauth_callback when going through the authorization process, twitter will halt at the PIN page (behaving as if you are using a client application). That's easily fixed..

NB: the root cause is that oauth 0.3.5 sets "oob" as the oauth_callback if you don't explicitly set it. This triggers the twitter desktop PIN flow.

Next, the major change in 1.0a was to add an oauth_verifier parameter. Twitter sends this back to you after the user has authorized access, and you need to include this parameter when exchanging the request token for an access token.

I've created a minimalist application that demonstrates the twitter API with OAuth 1.0a in rails. I've set this up to run at heroku.

The source is at github for all to share: http://github.com/tardate/rails-twitter-oauth-sample/tree/master

And there's a running demo site at http://rails-twitter-oauth-sample.heroku.com.
read more and comment..

What! Do rails development on Windows?

I've raved about heroku before, and it still roasts my bacon.

In recent months, there's been a bit of a switcheroo - first the migration to herokugarden, which retains all the original online editing and hosting. The perfect solution for hobby projects or prototypes. Now I'm migrating back to heroku itself, which has become their solid production hosting facility for rails applications.

As Sarah Mei reported, the heroku gem (used to create and manage your heroku application instances) had problems running under Windows, due to gem dependencies that do some decidely un-Windows things.

There is now an updated heroku gem (1.0) that I just tested out, and am happy to say it is now working fine under Windows. There are some dependent gems and it can be required to make sure you get the version that specifically supports windows. That used to include json, but at the moment the main version-pegged gem I'm using is sqlite3-ruby (at 1.2.3 instead of the head at 1.2.4)

Perfect! Testing it out..

Sarah gave the hint as to how to fix the older heroku gem (0.9.1), and has a forked version on github. A few people collaborated to fix up the code there so no longer any script editing required (basically to remove any dependency on taps for the gem build). Installing Sarah's version involved cloning the repository, building the gem and performing the local gem installation: