A provocative comment by Jason on This Week In Startups had me stop and think about the open innovation "fad".

He said something to the effect that all the open feedback and idea suggestion sites like UserVoice and GetSatisfaction were nothing but a great way for your competition to sponge on your success and out-innovate you by just pilfering all the good ideas. And you'd be a muppet to use one for your business.

The automatic reaction is that this makes logical sense. It is similar to the classic objection by the insecure and IP-obsessed to justify a closed innovation processes.

Certainly, innovating in public does expose you to some risk of IP leakage. That's undeniable. But maybe it's not so black and white: it's whether on balance you will gain more through greater engagement of an interested and motivated audience than you lose from competitors looking over your shoulder.

Personally, I think this is a false conundrum, for two reasons:

Good ideas are not hard to find, it's what you do with them

, it is a myth that "good ideas are hard to find".

So what if a competitor can look at all the ideas suggested and rated by your users? Who has the skill and determination to sort the wheat from the chaff and execute? Unless you have the balls to believe you can out-execute your competition, you should probably think twice about running an open innovation process.

And if you are up against a company that is running an open innovation process, Dilbert has the best advice for you.

Open Innovation is not just about the ideas

So you put up a site soliciting ideas and feedback, sit back and just implement whatever comes in. Really?

Unfortunately that is plain fantasy, perhaps with a certain appeal to (a) those who don't really like dealing with people, (b) the lazy, and (c) epic procrastinators.

Opening up to your customer base and inviting them to participate in improving your products or service is not just a cheap way to downsize the R&D group.

First, it may not be that cheap, and second, you may not get many new ideas you haven't at least considered before. But done well, what you are building is a genuine relationship with your organization's most important constituents: real and potential customers. You are giving them some power over your process, engendering ownership and loyalty.

It is also not a one way street. People will soon give up on submitting new ideas and lose any warm and fuzzy feeling if it appears their suggestions just disappear into a black hole.

In other words, closing the innovation loop with feedback is critical.

It doesn't take much effort either - just commitment. Dell use a simple blog (Ideas In Action) to showcase how IdeaStorm submissions have wormed their way into actual product and service innovations at Dell. Simple and effective, and reinforces the value of participation (hopefully accelerating the innovation process in turn). Contrast the success of IdeaStorm with other innovation forums that do not have an closed-loop process (Oracle's Mix for example).

A competitor looking over the fence into your garden may be able to steal ideas, but they can't steal the community you are building, and can't replace your role in the virtuous feedback cycle.

They can however steal your business if you screw up on execution, or treat your own customers with disdain. But if that's the case, they would have crushed you whether you ran an open innovation site or not, right?

Soundtrack for this post: With A Little Help From My Friends - Joe Cocker
read more and comment..

Nexus One - WIN! Nexus One with jangly bling bits - AWESOME!

..or so my better half would say!

Google/HTC Nexus One is an amazing phone. I love it. Along with whatever Apple are announcing next week I really think it will be a big factor behind augmented reality and always-on mobile internet going mainstream in 2010.

But I do agree with Dvorak who made the point that the Nexus One is slippery and easy to drop, so the fact that Google/HTC packed in every feature but the kitchen sink but did not include a lanyard point is a major FAIL.

But not just for practical reasons... for some, the wrist strap is just a great way to bling your phone.

My partner has a handful of bells, pets and chains hanging out of her blackberry. I'm sure if she got a Nexus it would end up looking like this.. 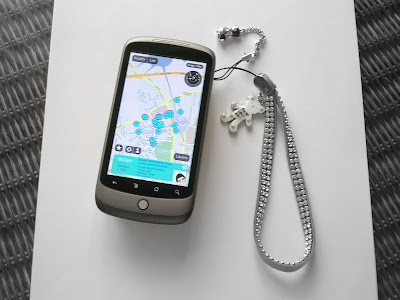 But all her excitement for the phone disappeared when she discovered there's no lanyard point to make this possible. Not interested!!

Did Apple start this trend of "smartphones don't need a lanyard point"? I'm sure Steve would hate to see all those jangly bits falling out of one of his devices.

Come to think of it, maybe there's some cunning google geek logic at work..

No lanyard point = less chance of the phone being purloined by the gf/wife!

Authlogic_RPX is the gem I released some time back that lets you easily support multiple authentication schemes in Rails without really having to think about it (Facebook, twitter, OpenID, Google, Yahoo! etc etc etc).

With thanks for contributions from John and Damir, Authlogic_RPX 1.1.1 is now available and includes an internal identity mapping that lets you tie multiple authentication methods to a single user. There are also some other bug fixes and improvements, so it is recommended you update Authlogic_RPX even if you don't want to enable the identity mapping.

See the Authlogic_RPX repo on github for information about installation, usage, and don't forget the sample site (and sample code).

Under the covers, it uses the RPX service from JanRain, a bit like this:

To get a better idea of why you might want to use Authlogic_RPX, and some pointers on how to do it, here's a reprise of my presentation on the subject to the singapore Ruby Brigade last year:

Cloud Computing - Why IT Matters

I caught Simon Wardley's presentation from OSCON on the IT Conversations Network; you can see in video below. He's an engaging speaker, and I think his characterisation of Cloud Computing as nothing less than a cultural transformation akin to the Industrial Revolution is spot on.