Voltmeter modules are a very convenient way of adding voltage display to any project, because they require no supporting circuitry or microcontrollers.

There are two and three wire modules in the market. Two-wire modules are the simplest (and generally cheapest). For most applications where a simple readout of a power supply is required, they are most convenient since a separate power supply connection is not required. It does mean of course that the meter draws current from the circuit under test, and will only work down to a certain voltage (usually ~4.5V).

For more precision measurement, the three-wire modules are best as they present relatively high input impedance (> 100kΩ), and can measure voltages all the way down to 0. As an example, Adafruit have this 3-wire module in their catalogue, but they are widely available from most online sellers.

I recently received a 3-wire module as part of a kit and put it to the test. Using my DMM as a reference, it appears accuracy is within 40mV, good enough for general purposes. 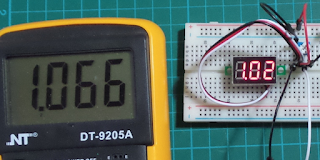 A Colpitts oscillator uses a combination of inductors and capacitors to produce an oscillation at the resonant frequency of LC circuit.

To see that in action, I built one on a protoboard and it delivers an almost perfect 22.9kHz .. compared to the theoretical 22.5kHz.

Here's a trace of the output signal on CH1, and the mid-point of the capacitor pair on CH2:

So four of these USB Webmail Notifier devices turned up in a dusty cupboard
in the office.

A quick tear-down shows they contain a super-simple circuit - just a
SONiX Technology SN8P2203SB 8-Bit microcontroller that handles the USB protocol and drives an RGB LED. The SN8P2203SB is an old chip phased out 2010/04/30, superseded by the SN8P2240. They have a supremely primitive USB implementation - basically mimicking a very basic USB 1.0 HID device.

A quick google reveals quite a bit of old code lying around for various projects using devices like this. Most seem to use libusb for convenience - and often 0.1 legacy libusb that. As I'm mainly on MacOSX, the code is not much use since Apple no longer allows claiming of HID devices
and the libusb team decided not to try to get around that.

So to bring things up-to-date, I wrote a simple demo using hidapi
and things all work fine - see the video below.

Now I just need to ponder on good ideas for what to do with these things!

As always, all all notes, schematics and code are in the Little Arduino Projects repo on GitHub.

LED cubes were a "thing" a few years back maybe ... but I've never built one. Time to fix that...

It's encased in a Ferrero Rocher cube box. During the build, that raised some challenges - most of the effort in building the project concerned squeezing all the electronics into the space in the lid (which becomes the base of the cube). Not quite as small as HariFun's "World's Tiniest RGB LED Cube" but about as small as you can get without resorting to SMD LEDs!

As always, all notes, schematics and code are in the Little Arduino Projects repo on GitHub. Here's a quick demo: