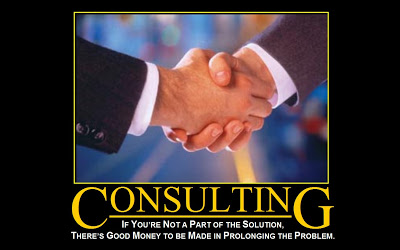 A Redwood, my love stands

Sun-scorched clouds retreat
under your glare, I stand

I may die, may I fall
Stronger for you

The Eyre Affair - Lost in a Good Book

Laurent Schneider just asked what LinkedIn is good for?. Good question. One I've been asking myself for the past couple of years as I've seen a dribble of invites coming in.

Then I changed jobs. Something I've done many times before - but all before the era of social networking. I'm ashamed to say I have more dud email addresses and phone numbers in my little black book than I care to mention ... and no way to try to get back in touch. This time is different. It hit me in a flash that with LinkedIn, I hope to never accidentally lose contact with good friends and collegues again.

There's nothing flash about LinkedIn, but it does what it does really well. Managing a network of contacts that trascend jobs, geography and time.

I'm also on Facebook of course. But just like Amber and Leo and many others are asking ... so what does it really do for you???

Sure, if you are not on Facebook you just have no Web2.0 cred because it is the uber-hyped social networking poster child of the moment. But will it ever be more than a footnote in Internet history? I think not. It's gonna tank, and fast.

To tell you the truth, something just didn't feel right the moment I got on Facebook.

First, there was the insidious commercialism. Initially very subtle. Like build your personal library .. but did you realise most "bookself/CD rack" application authors are skimming an Amazon kickback from your personal collection? And now the talk about advertising nicely targeted thanks to all the work you put into your profile. And who benefits? Zuckerberg I think. Certainly not you.

Networks are about respect and trust. This just doesn't smell right. And it is not about Microsoft taking a stake in Facebook, presumably to get placement rights. As it stands, I think Microsoft is the sweeter-smelling partner (at least with them I know where I stand).

Then there's the utility. While LinkedIn is a great example of a site that does one thing, and does it well, wherefore Facebook? All those Zombie invites, pokes and superpokes. Everyone's having a ball, but what are you achieving except repetitively and redundantly proving the network effect, spreading your vampire bites amongst your aledged "friends". But beyond these mickey-mouse apps, what can you do on Facebook? Feels real constrained to me. I have little control, and this is meant to be my network, my social networking home-site? No way, thanks.

Of course, now there's increasing discussion of the natural next step towards portable/unified social networking that is essentially shared infrastructure, just like DNS is for computers. OpenSocial is one attempt. Time will tell whether it is the solution. Regardless, we will move towards something of this nature. In such a world, what does Facebook offer? How is it differentiated? The shifting wisdom of the crowds will easily move on to the next post-MySpace, post-Facebook social site you must be on. Not that Facebook's going to disappear, just slowly receed into the background, over-taken by the new young punks.

Tim O'Reilly may not think Google/OpenSocial have it right yet, but he may be spot-on with his comment that..

I think Amazon is the only company that really understands that we're in the process of building an internet operating system, and is building services with the depth and power that will be required to create the next generation of computer applications

So while I will stay on Facebook, poke my friends and play Scrabulous with my sister, I'd run a mile before putting money into the company now. They're gonna tank. It'll happen fast, and probably sooner when we all expect.