TechnoDjango - The Lost Fingers Pump Up The Jam

NPR Fresh Air made me wish I was at the Montreal Jazz festival this year. The Lost Fingers' take on hits from the 80's are great fun, and great listening.

too good to pass without note.. (more about showing the whale here)

Yes, of course we have an open social media policy

We embrace openness and customer engagement using the latest social media tools such as twitter, facebook and blogs*

* subject to prior approval, review, certain topic restrictions and we reserve the right to change our mind, terminating your network or your employment, now or at any time in the future. Have a nice day.

Tom Fishburne perfectly captures the reality of how many big companies really work. This may be painfully funny, but sadly I don't think it's all fiction... 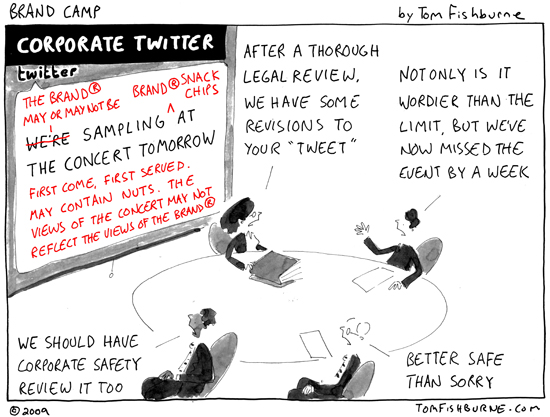 Heinlein packs this atomic moonshot adventure with just about every Boy's Own plot twist possible and tells a rollicking ripping yarn. What's amazing is the detail of the hard science throughout the book - especially given the fact it was written in 1947.

All the shucks, gee willikins is quaintly pre-baby boom, while the embracing of atomic power with such wild abandon is frightening in retrospect. Altogether, it's a great - if dated - story; a true testament to Heinlein's genius and imagination.

On atomics: it is possible the tide of opinion may be swinging back to nuclear. The ABC Science show just featured a story on the safer and cheaper generations of reactors coming online (transcript, audio). Today's generation III reactors, and the generation IV on the horizon offer even cheaper, safer and cleaner power (literally eating the waste products of earlier designs). All well and good, but it would be a concern if "new atomics" became the quick and easy fix that sabotages the head of steam building up behind the true clean, green renewables (like solar nanopillars).