My Nexus One and the Japanese telcos had a 'lost in translation' syndrome over the past week, but I am back home now in Singapore with all the broadband that entails! I think I'll be retro-blogging for weeks to make up for the few fantastic days spent back in Tokyo. Big props to my uncle and his family who were great hosts and helped us make the most of a short trip.. 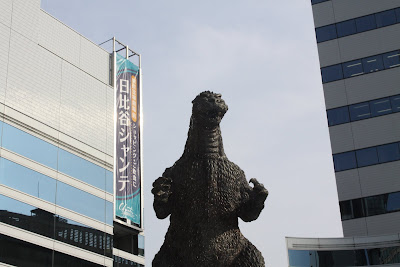 After stumbling off the Airport Express bus and checking in early, what else to do but hunt down the lair of the famed Godzilla (ゴジラ, Gojira) near Ginza (銀座). She's HUGE! (No, that is sarcastic. Artistic camera angles are required)

See other posts in the Tokyo series:

Looks like DBS have decided that iPhone is now the official generic name for any kind of smart phone!

Click on their Win an iPhone ad and read the not-so-fine print (it's an HTC HD mini ;-) 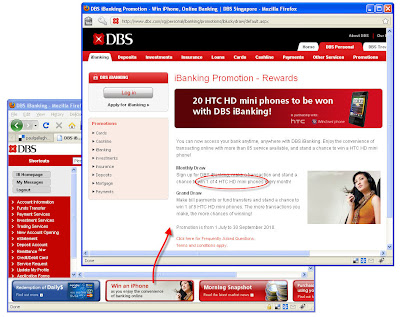 iPod has arguably already attained genericized trademark status for any kind of MP3 device (taking the mantle from it's predecessor, the Walkman).

And it seems Main Street has long since given Apple another category winner with iPhone joining the likes of Escalator, Zipper, Butterscotch, and even Heroin(!)

Which can really piss off pedantic technologists and the people who have to sell the phones - as brilliantly captured in the iPhone vs HTC animations by the guy that Best Buy wants to fire.

Any+Time was one of the more interesting options I covered in my Quick Review of jQuery Date/Time Widgets the other day.

Any+Time had a lot more functionality than I got to investigate at the time, and there were some specific features I wanted to checkout in more detail - in particular timezone handling - so I built another little demo called kalinka.

kalinka is a simple tool to construct Google Calendar Event URLs without needing to publish an event in your own calendar. You can then put the link in an email or a website. Other people can then use the link to create the event in their own Google Calendar.

kalinka mimics the basic functionality of the Google Calendar Event Publisher, except that it also demonstrates using Any+Time to offer specific control of the timezone.

Try out kalinka here, and feel free to pillage the scripts. 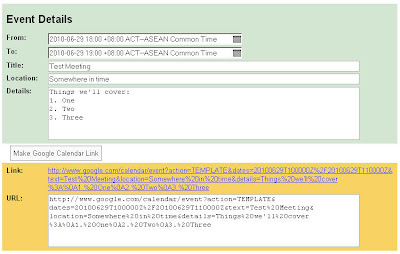 The third-party authentication dilemma: does Facebook pwn my site?

I've argued for some time that it is crazy for most websites to have their own authentication (username/password) system these days.

And the shift is well underway. More sites these days are offering the ability to authenticate using twitter, facebook, google or other credentials. Janrain chief executive Brian Kissel has said that

..publishers are jumping on-board as they realize it’s valuable to know who their readers are and that it’s much easier to convince them to sign in with an existing account than to create a new one

Jason Calacanis was one of the high-profile Facebook quitters who got "caught" sneaking back in. He explained the reason on a This Week in Startups .. to (temporarily) regain control over all the third-party applications he'd forgotten were using his Facebook account for authentication.

Suddenly, you are feeling the downside of depending on a third-party authentication service:

So is there better way?

If your site is directly linked to the third-party service (e.g. a tool for twitter, or a Facebook application) then the answer is no, and the question doesn't even make sense.

But for most cases, we are basically outsourcing the identity management and authentication, and want to avoid getting caught down a blind alley.

Pure OpenID is one approach: it is not controlled by any single vendor, and there are capabilities such as delegation which allow users to pick and choose their provider. The unfortunate fact is that OpenID is far from mainstream, and will likely remain a mystery for most users (even if it is hard at work under the covers of their Google or Yahoo! sign in).

Personally, I think the best approach is to disentangle ourselves from directly dealing with identity providers. By outsourcing the identity management and authentication process to an intermediary that aggregates the services of many identity providers we get a nice compromise:

The best solution I have found so far is Janrain Engage (formerly RPX). I've used this on a number of sites (e.g. CloudJetty - my directory of cloud/SaaS applications), and released a gem (authlogic_rpx) for easily using the service with Ruby on Rails.

If you are concerned about your website getting locked in to a particular authentication provider (whether it is Facebook, twitter or anything else) then I would certainly recommend you check out Janrain Engage.

Now I realise this may come across as an unabashed plug for Janrain, but the truth of the matter is that (a) it works, and (b) I haven't really been able to find any fully baked alternatives. If you do know of other similar services or ways of approaching this problem I'd be really interested to hear about them.