Config Files for Windows - an Enhancement

In a previous post, I described a general scheme for managing config files for Windows.

Well, there's a simple enhancement that I've added concerning how to locate the config file for the script in question.

The issue is that if I run a script, you always wanted to look for the config file relative to the script location. This can be easily done using Windows Batch Parameter Expansion. %~dp0 expands to the path of the current script, and %~n0 is the name of the script file. Hence, to name the appropriate config file for a script, we generate the name as follows:

I really like Geoffrey Grosenbach's ruby on rails podcast, especially because it's not just about rails (even though Rails is a keen interest of mine).

On the latest issue, I was excited to learn about biznik.com. "Business Networking that Doesn't Suck" as they say.

I immediately subscribed, but was disappointed to find that there's nothing happening in my local area yet (Singapore), at least not within 6000km.

Something that we should change soon, especially given the attention paid to entrepreneurship in Singapore. Take the efforts of SPRING for example, or the investment that the government is making in Interactive Digital Media.

I love the idea of this site, and hope to find some local compatriots up there soon!
read more and comment..

I want a t-shirt just like this for my birthday, except I'd change it to "..than MY blog" and add my url;-). 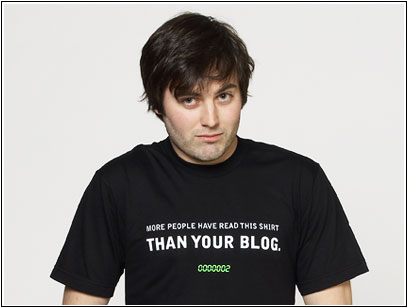 .. but Slough is still my favourite office.