The Full Monty - from Ruby to Python n00bie

Oct 13, 2012 Python FLOSS Ruby
4 minute read
Ruby developers are a pretty spoilt bunch these days. The community has overall done a great job of rolling many of the advances in modern development practice into the tools and conventions we unconsciously put to work every day. 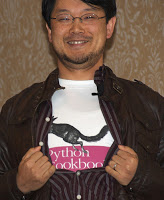 Now I wonder what life is like in the Python community? Like many Rubyists, I've played around with Python and Jython on and off. But nothing serious. And although you could get into a pedantic syntax war, I suspect for the most part the Python and Ruby communities don't overlap simply because once you dive into one camp, the only real reason you would switch to the other is because of some external driver (like a client's development standards).

It was a casual discussion about testing that re-ignited my interest in taking a peek over the fence. I picked up a copy of Greg L. Turnquist's Python Testing Cookbook and enjoyed playing around with a couple of the Python testing tools. It's an excellent book for ramping up your testing skills with Python - eminently clear and practical.

I was pretty sure that if any language community came close to matching Ruby's approach to development it would be Python. But is that true?

Most comparisons of Ruby and Python (like here, here and here) focus on language syntax and features. Conclusion?

What I find more interesting is a comparison of the fundamental productivity patterns used in each community, assuming your goal is to produce high-quality code that can be reliably distributed or deployed, and likely makes liberal use of other - probably open source - code components.

So here is a rundown for some of the common patterns I could not do without when developing in Ruby, and what appear to be the leading Python equivalents - according to my research as of Oct-2012, but I welcome corrections and further information from any Python experts out there!

We don't like dependencies from other projects leaking over to contaminate and confound what we are trying to work on. While you could run up a separate VM for each project, it is much better if you have tools that can keep installed libraries and even the language distributions separate for each project.

It is likely our project will make use of other packages. We want automatic dependency management so that we can easy deploy predictable compositions of code packages.

The Ruby Way: bundler
The Python Way: pip with a requirements.txt file. Ref: SO

For anything more than trivial scripts, we probably want to package our project so that it can be reliably distributed or deployed.

The Ruby Way: we use gems. Easily built by hand, or bootstrapped with a tool like bundler or jeweler
The Python Way: use setuptools (enhancements to the Python distutils) to build and distribute eggs. Ref: SO

Both Ruby and Python are very open-source oriented programming communities. Not only do we consume a great deal, but it's likely we'll often want to make our own contributions easily available to others.

The Ruby Way: RubyGems for distribution, with source code most often found on github.
The Python Way: pip. And source code also seems to be showing up more on github than historical use of svn repositories. Ref: quora

We'd prefer a common approach to running project build, doc, install and test tasks rather than rolling our own for each project.

The Ruby Way: rake.
The Python Way: this one I'm not so sure of. It seems most projects simply provide a custom setup script using distutils, but there are a variety of projects that support more complex build requirements. Ref: SO

It's 2012 already, we know that automated testing is a cornerstone of quality software. Especially so for code that is going to be widely shared and reused. Whether you do TDD, BDD or simply unit test, we all have a good test framework or two on our toolbelt.

The Ruby Way: Test::Unit, RSpec, Cucumber amongst others. It is extremely rare to find a project these days that doesn't have tests of some flavour.
The Python Way: unittest (sometimes called PyUnit) and doctest are common frameworks for unit testing and TDD. nose is a test runner, especially good for non-trivial projects. Lettuce is the rough Python equivalent of Cucumber. Like Ruby, there are many other projects to assist testing such as mocking tools like Mockito.
Bonus: open source projects have been rapidly adopting Travis for automated continuous integration on the back of a github commit. And it works for Ruby and Python.