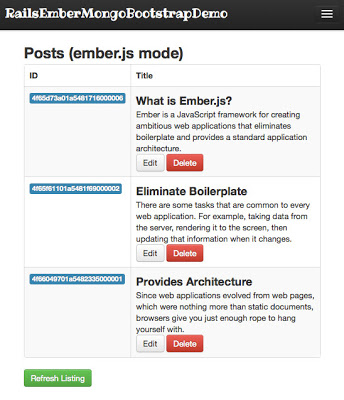 I was fired up to try out ember.js after seeing Cameron's presentation at the last Singapore Ruby Brigade meetup.

Ember is one of the many javascript MVC frameworks that have been sprouting up over the past year, and it seems to offer a nice level of abstraction. I was quite interested to see how it might fit for a Rails/MongoDB application we're currently working on, so a few tests were in order.

I hosted some tests on a Rails 3.2.2 base, and threw in a whole bunch of technologies to see how well they play together. The story so far:

Surprisingly, this all hangs together without too much fuss! You can see & fork the demo at rails-ember-mongo-bootstrap-demo.